“Perseverance is a great element of success. If you knock long enough and loud enough at the gate, you are sure to wake up somebody.” ~ H. W. Longfellow

I have to sadly admit that I am illiterate when it comes to car functionality. I am one of those people who lose their mind when a light goes off on the car dashboard. Of course I know when I am out of gas, or forget to release the emergency brake. That’s pretty much it. Oh, I almost forgot that if the gas cap isn’t appropriately twisted, the check engine light goes off too. Trust me, I know what I am talking about!

Few years ago, on my way to work, I had a flat tire. Since I was close to a gas station, I walked to ask for help, but to no avail. One customer offered to come with me and asked me to open the trunk. To my surprise, he pulled out a smaller tire. Until that day, I had no idea there was a spare tire that lived in my trunk! After he replaced it, he reminded me to make sure I buy a new one before the end of the day. I offered him the cash I had, but he refused it. When I insisted, he declined the offer and walked away. He actually disappeared.

Another day, I was driving and all of the sudden, a light goes off on my car dashboard, and it’s one I have never seen before. As I researched on it, I found out that it was related to the airbag malfunction. I then took the car to the mechanic, who stated that that fault can only be checked and corrected by a Toyota dealer. He however assured me that I could drive the car with that light on, as long as I  don’t get involved in an accident. With his confirmation, I imagined the repair cost being super expensive, so I put that subject on the back burner, at least until the next inspection. Surprisingly, the car passed 3 inspections with no problem. Hence, I didn’t see an urgency to get it fixed. I then put the matter to rest, leaving it for the day I’d plan to sell it.

About 3 years later, I received a letter from Toyota Motor Sales, informing me that all the cars similar to mine, the same make, model and year, have been recalled because of a safety issue that may cause airbag inflators to rupture and propel fragments towards occupants in the event of a crash. I could not believe my eyes. As instructed, I immediately called the nearest Toyota Dealership to schedule an appointment, for them to take a look. The part to be replaced was on back order; therefore, I had to wait for a few months until it arrived.

Finally, I drove my car there. Once there, I was given a comfy seat and a cup of the Starbucks coffee. After waiting for about an hour and a half, one staff member called my name and handed to me a bill that noted $0, and pointed me to a shiny car, of which the service included a complimentary car wash. And I happily drove off, singing, grateful. 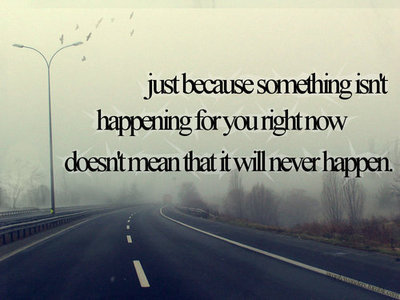 I am by no means calling “perseverance” my car coincidence fix, but I have learned that waiting patiently makes a difference. There was time that I considered getting it fixed, but I dreaded because honestly, I didn’t want to hear that it’d cost me thousands of dollars; so I dismissed the idea all together. That’s all I did really. There are so many things that I had been asking God and still do. I sometime want them in a certain way, certain circumstances or specific time, but it doesn’t necessarily happen in that order. Sometime I get answers sooner, sometime later, or different from what I had asked.

I really find it very hard to wait for certain things, especially when I cannot do anything to speed up the process. The bible gives us many examples of people who waited and those who rushed to resolve it in their own ways. But for the sake of “perseverance”, the stories attached here are for those who persisted: mothers whose dead children were brought back to life, diseases healed, the barren bore children: Luke 8:43-48 , 2 Kings 4: 18-37, 1 Samuel 1: 1-28 and many more.

As I pondered on what happens during the waiting period, I was intrigued by the story of Jacob, Abraham’s grandson. One of the meanings of his name is: “be behind”, because he was a twin brother to Esau, and when they were born, he followed his older brother holding his heel. Jacob can also mean “a cheater”, because he lied to his brother by tricking him into giving up his birthright for a bowl of lentil stew. Jacob also later lied to his father, Isaac, who mistook him with Esau because he exactly dressed up like him. Isaac, who was old and blind then, blessed Jacob, the youngest, when instead, the birthright blessings belonged to Esau.

When Esau found out, he vowed to kill his brother, who fled for his life. Fast forwarding to many years later, Jacob prepared to meet his brother that he has not seen for many years. Before he could get there though, he encountered something that would change his physical appearance, and his name of “a liar”, to receive a new name, that would carry on to many generations. He wrestled, physically, in preparation to find favor towards the brother he had wronged. Moreover, Jacob was put in a vulnerable position after his wrestling, which meant that he had to completely rely on God, in the presence of someone who had vowed to take his life.

“The same night he arose and took his two wives, his two female servants, and his eleven children,and crossed the ford of the Jabbok. He took them and sent them across the stream, and everything else that he had. And Jacob was left alone. And a man wrestled with him until the breaking of the day. When the man saw that he did not prevail against Jacob, he touched his hip socket, and Jacob’s hip was put out of joint as he wrestled with him.

Then he said, “Let me go, for the day has broken.” But Jacob said, “I will not let you go unless you bless me.” And he said to him, “What is your name?” And he said, “Jacob.” Then he said, “Your name shall no longer be called Jacob, but Israel, for you have striven with God and with men, and have prevailed.”

Then Jacob asked him, “Please tell me your name.” But he said, “Why is it that you ask my name?” And there he blessed him. So Jacob called the name of the place Peniel, saying, “For I have seen God face to face, and yet my life has been delivered.” The sun rose upon him as he passed Penuel, limping because of his hip.” Genesis 32: 22-31 (ESV)

As Israel cowardly gathered his people and started bowing himself to the ground, Esau ran to meet him and embraced him and fell on his neck and kissed him, and they wept.

Do you have something that God promised to you but it had taken many years to become true? Have you been praying but nothing seems to happen? You and I have good news: God does not change His mind: “I will not violate my covenant or alter the word that went forth from my lips. Once for all I have sworn by my holiness; I will not lie to David.” Psalm 89:34-35. Go ahead and replace David by your own name in the above verse. Don’t take shortcuts! The bible says that those who put the Lord to remembrance shouldn’t take rest.

Keep praying and seeking the kingdom of heaven, everything else shall be added. Don’t stop fighting the good fight, keep the faith, keep running towards the finish line. Hold true to the good news you have attained. Don’t be silent, until God establishes and makes you a praise on earth, your righteousness goes forth as brightness, and your salvation as a burning torch. God is not deaf; His calendar is different from yours and mine, but His plans are to prosper us, not to harm us. The waiting time may be that God is still molding and toning your character to prepare your future.

“Sometime God answers prayers by giving you what you would have asked, if you had known what He knows. ” DON’T GIVE UP, hang in there!

Copyright © 2021 Beauty For Ashes. All Rights Reserved. No part of this website or any of its contents may be reproduced, copied, modified or adapted, without the prior written consent of the author.

a blog for Christians tired of church