You may have read one of the famous Bible verses on love in the book of the first Corinthians chapter 13: “Love is patient, love is kind” etc. There are a few lessons I recently learned from it that challenged and convicted me. I plan to share some details in a separate post. For now, I will simply say that I am naturally sensitive and passionate, which can be good and bad. However, I will try to focus on the good part for now.

I cannot stand injustice. It hurts so much when people are not being fair. I don’t like when bad things happen to good people. I cry when I see cruelty against innocent people. I weep in front of my TV, computer or out in the open when I see homeless children who live off of the dumpster and in the streets, homeless grownups against their will, poor and hungry people. It is heartbreaking to see people who once had it all together and wars/tragedies suddenly turn their lives upside down, into refugees, homeless, helpless and starving. Life is so unpredictable.

On Tuesday this week, a woman that I have always looked up to and admired for her courage as long as I have known her, surprised me with the news I was not expecting to hear. I was already aware that she has lost her job several months ago and had been unsuccessful to obtain another one, but I had no idea as to what extent she was struggling. I wept as I read line by line. I was very sadden by the fact that she may lose her home, a home she built by herself, along with raising her young children after she lost her husband during the 1994 Rwandan genocide against the minority Tutsi group in her late 20s.

My heart was torn. I was at loss for words! I haven’t cried so much in a while like I did as she explained it to me over the phone. As I felt sorry for myself for being so weak and hopeless, I remembered how Jesus felt when He arrived at His friend’s house, Lazarus. As many people gathered and mourned for Lazarus who died 3 days earlier, Jesus wept, too! (John 11:35).

The Son of God wept, NOT because He was helpless like I was or often am in situations like this. In fact, His main purpose there after His intentional 3-day delay, was to raise Lazarus from the dead and glorify His Father! Jesus was moved by the pain and weeping around Him because of Lazarus. I remembered that very moment that Jesus understood my pain and indeed cared for my friend more than I did. Although I still wish I was super rich to be able give to my friend all the amount she needs, I know that a little bit can go a long way.

I launched a GoFundMe campaign for my friend Rose. I accepted that I may not be able to raise all the money that she needs at the moment, or that I may be surprised. Either way, I am being obedient, and trusting the Lord for His provision and compassion for His children. I have not really done any other fundraising campaign, and I absolutely hate asking money from people. Nonetheless, I also believe in God’s miracles and the way He uses His own people!

I cannot change the world; in fact, God knows that I am incapable of even changing a single soul. However, I am determined to do something small whenever I get an opportunity. And then, I want to leave the rest to God who is capable of answering prayers and being everything to those in need!

“Pure and undefiled religion before God and the Father is this: to visit orphans and widows in their trouble, and to keep oneself unspotted from the world.” James 1:27

“In all things I have shown you that by working hard in this way we must help the weak and remember the words of the Lord Jesus, how he himself said, ‘It is more blessed to give than to receive.” Acts 20:35

Sometime during my graduate studies at RIT in NY, a friend of mine asked me to help translate for a teenage girl that had been hospitalized but didn’t speak English. This girl fluently spoke one of the languages I understood from one of the East African countries. Her and I immediately connected and later, I was invited to their house to meet the rest of her family.

On my first visit, I was shocked to see how much preparation and trouble they went through to make it look like nothing close to a  simple gathering. It was like a royal dinner, composed of food varieties from East Africa to represent a feast that was apparently prepared for me: beef stew, plantains, homemade French fries, rice mixed with various spices, vegetables and many more. I didn’t know what to say. I normally have a disappointing appetite but this certainly did the trick.

As months went by and I visited the family again, it was exactly like the first time I was there. Since then, I figured that I should not tell them ahead of time that I was coming, after all we are Africans. Back home, you can simply show up unannounced! Even with short notice, they would distract me while I chatted with others, unaware that they were cooking. I couldn’t believe how generous they were. 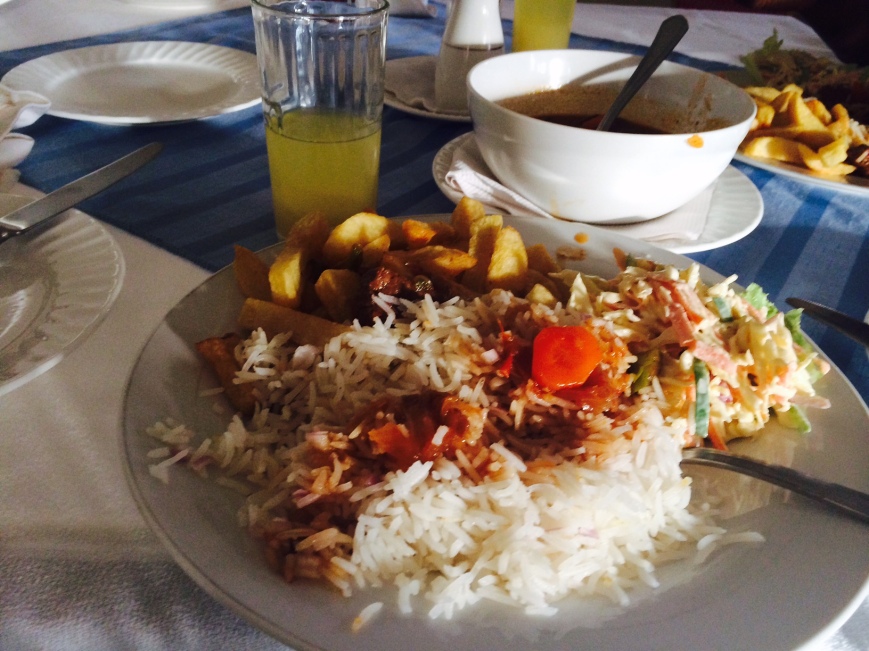 An East African dish. So delicious!

Truth to be told, I can tell that this family barely makes their living on possibly minimum wages. How do I know? Because of their employment type. It is also interesting that they always have a house full of people, literally; some of them are relatives while some others are just strangers they shelter until they can get on their feet.

If I didn’t know what they did for a living, I would just have assumed that they were rich. In fact, this girl who is my connection to them is not even their biological child. They actually met her somewhere along the way in Africa, and took her in because she had no family or anyone else to raise her. Personally, I am always amazed by how positive they are about life. They love God, others and they are hopeful people. Their home is always open to everyone.

Watching their way of life challenged me: how can someone like them be so generous, loving and positive when they live on minimum wages with a house full of people? Each time I speak to the wife, she quotes the Bible a lot and encourages me with Jesus’ promises and hope that is found in following him. I’m always amazed by her love for God even when I can easily see that the family struggles to make ends meet!

This family reminds me of the story of the widow’s offering where Jesus commented on her offering which was two small copper coins while rich people poured gifts in the offering box. Jesus saw that the widow has put way more than all of them because rich people gave out of their abundance but the poor widow contributed out of her poverty and put in all she had to live on. It is a challenging example that we often ignore!

A Rwandan Cabbage Salad. I made this one by myself🙂

A famous Bible verse about the way of love in 1 Corinthians 13 raises a very important question about generosity.

“If I give away all I have, and if I deliver up my body to be burned, but have not love, I gain nothing.”

Does this mean  that people can indeed give without love? The answer is possibly. Generosity works hand in hand with love. If they are separated it’s like faith without work. When this dawned on me, I desperately asked God to fill me with love first!

Honestly, it’s not always easy to be generous, especially with money and time. In fact, it is a human nature to be inclined to give or help people that we know well or care for. Of course it’s very important to ensure that your donations go to credible recipients but we sometime cling on it that we often forget that our giving shouldn’t necessarily be dictated by how grateful or recognizing our recipients are.

Also, for those who give often wonder how much is enough to give!

But I have learned that it’s not about the amount, but the heart of the giver. And that it is much more blessed to give than to receive.

I don’t know about you but I often want to hold onto what I have with excuses that I don’t have enough or that I have to enjoy the fruits of my hard work after all. Nothing is wrong with that, but after I was reminded that “it is blessed to give than to receive“, it changed the way I approached giving, loving people and generosity.

I have been praying and asking God to make me like the man that David cites in Psalm 112. Verse 5 states: “It is well with the man who deals generously and lends“, and verse 9: “He has distributed freely; he has given to the poor.”

I want to love and be generous to everyone God brings my way, and not expect anything in return. I am not the one to judge the character and be selective on whom to be generous to or not. I will leave it to God who will judge all the nations and reward everyone according to their work in this life. God is love and He sees everything. Everything I do is between me and Him, people easily forget!

“You have not lived today until you have done something for someone who can never repay you.’ ~ John Bunyan

Copyright © 2020 Beauty For Ashes. All Rights Reserved. No part of this website or any of its contents may be reproduced, copied, modified or adapted, without the prior written consent of the author.

a blog for Christians tired of church